my top 5 pizzas in chicago 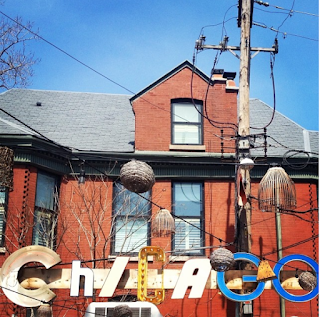 okay, i know i am probably starting to sound like chicago's pathetic ex who can't quite move on, but i have a few more chicago posts in me before i'm done. what can i say, i like to wallow.

plus, i can't claim to be a pizza connoisseur without providing a top 5 list, right? i am working on my cleveland list (and, if i'm honest, i'm constantly working on my all-time list), but i haven't been to enough places to post on that yet. it will come though! in the meantime, i'll continue my can't-get-over-her-ex perspective of chicago and talk about my top-5 favorite pizzas in chicago.

i'll start by setting up what i look for in a pizza. you had to know i would have thoughts on this, right?
first: i'm a sauce person. i want LOTS of sauce and it better be delicious. bad sauce or not enough sauce ruins pizza for me.
second: always pepperoni. get out of here with your sausage or your veggie pizzas. pizza isn't pizza without pepperoni. (can i get the word pizza in this sentence one more time?)
third: there are two secondary toppings that i look for. they both can prove to be difficult to find. the first is banana peppers. there is nothing more perfect on a pizza than the combination of pepperoni and banana peppers. in a pinch, pepperoncini will do. the other topping i'm afraid i'll never find outside of chicago: giardinera. spicy, pickled, and provides good crunch to any pizza.
alright, on with the list...

my last apartment was 2 blocks from the lincoln park lou's and this was both awesome and dangerous. as i mentioned in this post, we actually were more likely to get the thin crust instead of the legendary deep dish. don't get me wrong, the deep dish is great, but when you're eating pizza every week you need something a little less.... artery clogging? maybe i'm lying to myself about that. ANYWAY the thin crust pizza at lou's is amazing. the sauce has big chunks of tomatoes, and the cheese is melted over the toppings so everything stays in place. our favorite toppings at lou's are pepperoni and giardinera. the crust is this great thick, crispy cornmeal base and when it's well done it really holds up to the toppings. 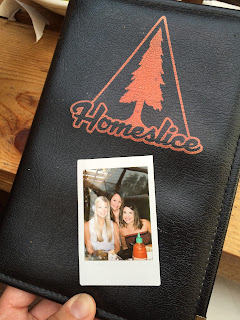 okay it's impossible to judge homeslice's pizza without taking into account all of the other things it has going for it. the restaurant has this great ambiance, with copper pendants, penny walls (and floors in the bathroom) and tons of outdoor space. the back patio includes an airstream trailer with booths and a there's even a super instagram-worthy chicago sign to complete the experience. however, the thing i love the most about homeslice is of course their pizza. here's where i might lose you: the pizza i love here is called the knife and forkner, and it's not a traditional pizza. it's basically a barbecue chicken pizza, but it also has pepperoni, bacon, and red onions. it is SO good. the crust is soft and pillowy and the sauce is tangy and sweet. it's a great alternative to traditional pizza. also, i can't talk about homeslice without mentioning that they have fantastic bloody marys- which come with a slice of cold hawaiian pizza as a garnish. they are the perfect accent to any pizza brunch. (pizza brunch is kind of a dream meal for me, btw)


pequod's is the "chicago institution" i would actually most likely recommend to non-chicagoans. lou's is great but honestly i think pequod's has the best chicago deep dish, and with only 1 location in the city it feels much more authentic. the wait, however, is also authentic, and with no reservations allowed you may wait quite a while for any dinner time visit, any day of the week. for whatever reason, be it the crispy crust and caramelized cheese they are so known for, this pizza just does not translate to delivery or pick up. if you want a really good pequod's experience, you really have to go there. SO, put your name in, and put your order in at the same time! they let you do that so your pizza might show up around the same time you get your table. it's great. as i said, the thing this place is known for is the caramelized cheese and crust combo. it is a beautiful thing. as with most places, scott and i order extra sauce here and i think it really benefits the thicker crust.


now, the pizza novice might not think you NEED separate categories for take out and dine-in, but i am no novice. any time i have had pequod's outside of the establishment itself i have been at least slightly disappointed (i mean, pizza is pizza). but the art of pizza holds up even with a 20 minute wait from pick up to first bite. the sauce is hearty but not chunky, the crust has that great quality where it's chewy but somehow light, and the pepperoni is stacked liberally between layers of cheese and sauce. the art of pizza is good just warm after driving it home, cold the next morning (if you like that kind of thing) and reheated the next day. if you're in the mood for deep dish but don't have the energy to eat-in (the energy to eat-in - is this a thing only parents actually feel?).


late in our chicago existence, home run inn opened a north side location at belmont and sheffield. i had eaten their frozen pizzas (ahem, don't judge me) years ago and always liked the unique crust. it's a little thinner than lou's and yet it stands up to our usual order with extra sauce. the first time i ordered home run inn, i accidentally (read: by fate) ordered an EXTRA LARGE and so we ate that pizza for like 3 days straight, and in the toaster oven, for days, it was still really good. the sauce is delicious, the cheese is really perfectly applied, and the crust is so crispy and buttery. my only complaint is that their giardinera has olives, which, barf who needs them?? but the giardinera is still good and spicy and adds great texture to the pizza. i think we actually ordered this the most in the last few months in chicago.

I REALIZE this may ruffle some feathers but i just had to say it. over the years i have always loved domino's. in college i would i get the $4.99 large pizza special, and eat it for days (i didn't say it was healthy). it was like, my meal plan as a poor student. since then they've obviously improved. their sauce is thick and flavorful, the hand-tossed crust is the perfect combo of pillowy and crispy on the bottom, and honestly, scott and i love it. we order it any time we want a really quick, hassle-free delivery pizza. (also any time we're hungover. they open at 11am). we have the app on our phones and just order "the usual" without talking to anyone (what's not to like?). plus, they have banana peppers so we can always count on our favorite order.
Labels: chicago pizza review 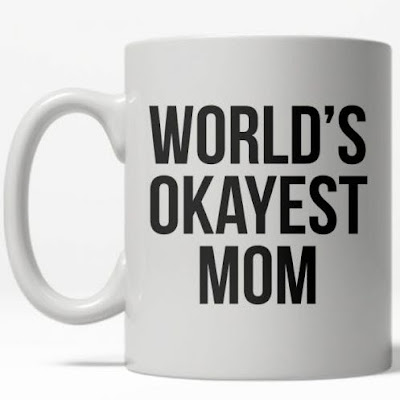 the goal of equal parenting: why i want to be the "okayest" mom