rookie review: the rta, west side market and townhall 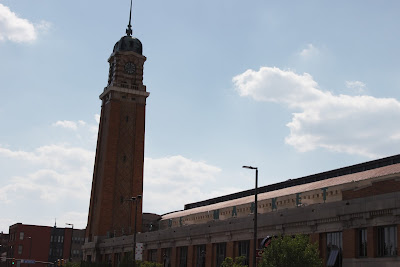 one of my favorite places in cleveland is ohio city. it reminds me of wicker park or logan square in chicago. it's the kind of place where everywhere i look there's a storefront or bar that looks appealing, whether because of beautiful typography on the sign or the independently-owned small business feel of most places. there's bars, restaurants, stores and microbreweries. oh, and it's home to great lakes brewing company too. it's just east of downtown and there's a red line rapid transit stop (RTA) there.

my friend beth and i took the RTA from beachwood to ohio city. in hindsight, i would not recommend doing this. ever. especially not on a 90 degree monday. the problem with the RTA is that the trains only come every 15-35 minutes. that is the actual time frame they provide on their website. beth and i just missed a train at 12:30 and didn't get on another one until 1. if we had only been taking the one line straight to our destination that might not have been that big a deal, but since we had to go downtown and then take the red line back out, this backed up our entire day. add in missing the red line that was in the station when we got off the green, and our one way trip just to get to ohio city was 1.5 hours. ALSO i think it should be noted that the trains are not stroller friendly. there are 3 steps up into the train car and the ramps on the platforms don't automatically align with the doors. i don't know how anyone in a wheelchair makes it work. like i said, in hindsight i would have driven. but i'm not writing off the RTA for future use, as long as it's adults-only, well-timed and maybe without transfers?

the west side market 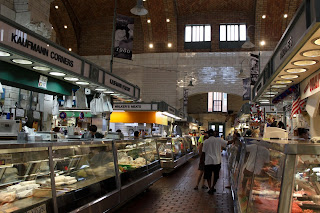 once we finally arrived in ohio city we headed straight for the west side market. i have been here a few times before and i've never been disappointed with anything i've purchased here. the large main building has booths full of meats, cheeses, breads, and desserts. the smaller building next to it has a ton of produce stands with vegetables and fruit. we walked through the main building and it took me no time to find my favorite stand - grandma campbell's cupcakes. 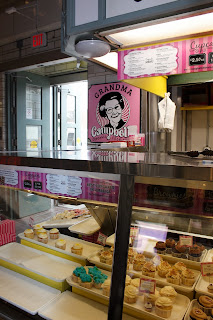 scott and i got their blueberry pancake cake balls last time and i was pretty sad they didn't have them again. but everything you get here is delicious, and they always have unique flavors. i'm always looking for a replacement for my favorite chicago cupcake place, sweet mandy b's, and so far this is it.
next, we grabbed some really great looking bread (that is a thing you can say when you love bread like i do) at a stand called mediterra. they had a lot of different types of bread, and lucky for beth, plenty of them were vegan. 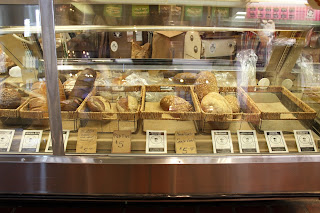 after procuring these essentials, plus some produce next door, we decided to head to lunch.

i've heard plenty of good things about townhall but had never been. it's just a few doors down from the market, and is one of the few breweries/pubs in the area that was open on a monday for lunch. one of the many interesting things about this place is that one side is a "cafe" and the other is a restaurant/bar. you can get counter service coffee, drinks and food at the cafe, or get table service at the restaurant. i ordered an almond milk latte from the cafe (YAY coffee places with almond milk!) and we went to get a table next door.
like i have said, i love a good patio, and this place has it. there are two larger tables creating a sidewalk patio up front, and a big gorgeous fenced-in patio in the back. but since it was 90 degrees and we had fiona, we decided to forego the patio and enjoy the breeze + air conditioning while sitting inside.
the restaurant was surprisingly packed for a monday afternoon, which i love to see. happily this didn't cause any issues with my enormous stroller and it didn't seem like anyone minded fiona's random shrieks or thrown toys. the waitstaff was nice and accommodating, while not being super attentive. the food menu was overwhelming in the best way. tons of variety and a weird amount of specialty options. almost everything can be made vegan, vegetarian or gluten free, and there are specials every day, including an organic specials menu.(helloooo harissa roasted cauliflower!) monday also has a great $3 draft happy hour but we were a few hours too early for that. 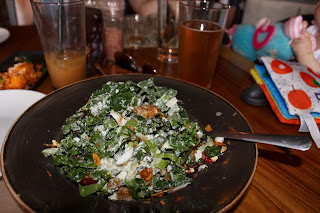 i ordered the superfood salad because it had SO MANY things i love: kale, a surplus of random vegetables, almonds, and obviously, caesar dressing. the salad was just okay, but that was good enough for me. sidenote: i have found that when dining with a baby, you sometimes scarf things down too quickly to care if it's the best thing you've ever eaten or just the sustenance your body needs to keep going. (#momlife?) if i had been sans-baby i think i would have been more invested in this meal. but did i mention there was beer?
the beer menu at townhall is amaaaazing. the draft list is at least 50 beers long and includes all varieties. i tried two new-to-me cleveland brews - kindred hawaiian shirt and platform becky blueberry cider. both were delicious, especially after all the walking, riding, and sweating we had done.
overall the experience at townhall was great, but i can't wait to go back to try for a better food experience, and of course try more beers. i'd love to make it to their patio at some point this summer. 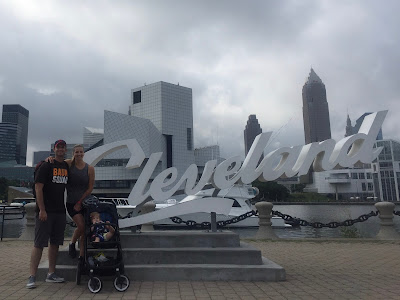